In another asinine show of control over it’s citizens,  the British government is once again telling them, who they consider STUPID, what they can and cannot watch when it comes to pornography and the type of depictions they can indulge. Let’s remind ourselves of the key word here, depictions, meaning NOT REAL, fake, and if it is a real spanking, as we all know a lot of folks truly do like that sort of activity, including myself.  What pisses me off about all this is the self righteous religious, moralistic right thinking they continually know what’s best for everyone else. When in actual fact they don’t even know what’s good for themselves!!

As of late we here in Canada have been battling the Harper Government over bill C-36 now approved for royal ascension on December 6th, a date that is so wrong on so many levels, not only for the bullshit bill to go live, but for what the date stands for, the École Polytechnique massacre and then followed by the International Day to End Violence Against Sex Workers on December 17.  Irony abounds, but so does the belief that citizens of the free world’s countries don’t know what’s best for themselves except the idiot leaders!

Have a read and judge for yourself.

The Independent says that practices that producers are now prohibited from depicting are listed as:

When compared to the rest of the world, UK users were 201% more likely to search for ‘caning’, followed by ‘spanking’ (43% higher incidence).

Below is a handy infographic depicting what the Brits would miss the most. 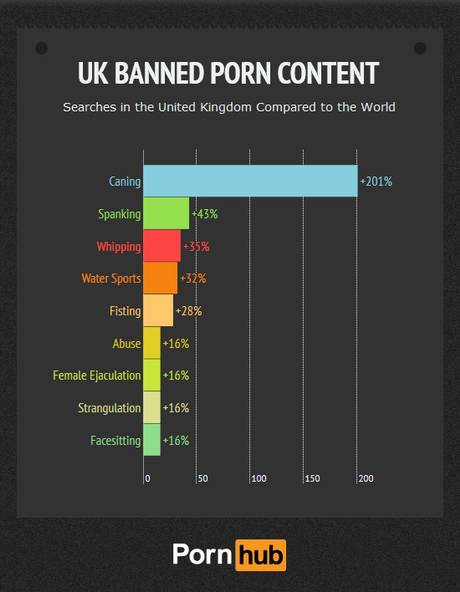 Myles Jackman, an obscenity lawyer, said that his concern about the new regulations were about the wider issue of policing the internet.

‘Pornography is the canary in the coalmine of free speech: it is the first freedom to die. If this assault on liberty is allowed to go unchallenged, other freedoms will fall as a consequence.

‘This declaration of State censorship will affect millions of consenting adults who choose to view British pornography.’